Selecting Multiple Figures in a Drawing

By default, a previously selected shape will be deselected when another is selected; however, TouchDraw for iPad does support Multiple Selection.

Multiple Selection in TouchDraw for iPad is accomplished by using the Function Key Feature in combination with the normal selection gestures. The bundled floor plan sample will be used to show how this feature can be used to select multiple shapes in a defined area, as shown below. 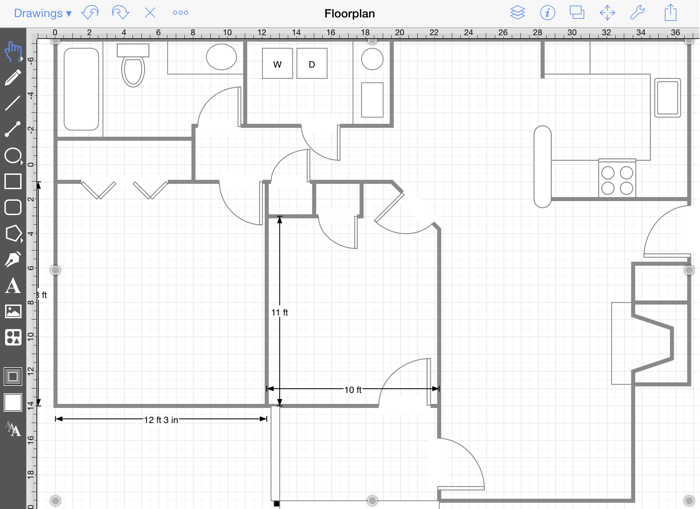 To enable the Function Key Feature, press and hold on the empty portion of the Drawing Toolbar for ~1 second until it turns red and continue to hold a finger on the toolbar while using the other hand to tap on additional figures. It will remain enabled as long as the utilized finger/thumb remains held on the toolbar. While enabled, selection gestures can be used to add or remove figures from the multiple selection.

With the Function Key Feature enabled, tap on each figure in the drawing to select it and then release the utilized finger when finished to disable this feature. The same action can be performed to remove a selection in a drawing. The Function Key Feature is disabled as soon as the used finger is released from the Drawing Toolbar.

In the example below, we will be using the Function Key Feature to select the Toilet, Stove, and Washing Machine in the above shown Floor Plan and then change the selected figures Fill Color to a solid, light blue. The Floor Plan will appear as shown below once all steps have been completed. 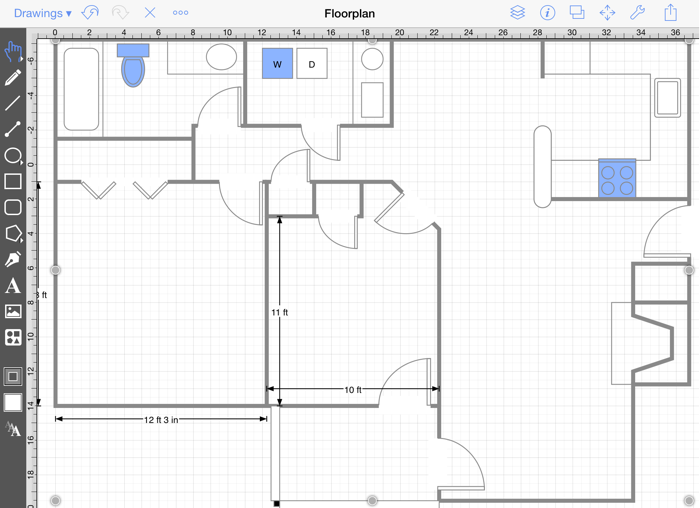 See it in Action!

Follow the steps below to learn how to select multiple figures within a drawing and then change the fill color for the selected figures.

For more information about the methods made available for selecting figures within TouchDraw, please refer to the Selecting a Figure page in this documentation.